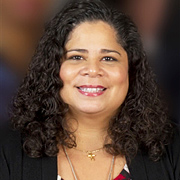 Nancy Mendez joined United Way in 2009 and is the Vice President of Community Impact at the United Way of Greater Cleveland. Nancy is responsible for developing the department’s approach for the design, development, testing, implementation, and evaluation of community programs, and special projects. She is also responsible for ensuring an effective allocation process and grants management.

In 2013 Nancy Mendez was selected as a United Way Global Fellow. Ms. Mendez is part of an elite group of national and international United Way staff selected to participate in the 2013-2014 United Way Fellowship Program.

Nancy worked as the Program Director for the Center for Minority Public Health of Case Western Reserve University which focused on community-based research. The research examined issues relating to systemic poverty, drug use, HIV, and mental illness within minority populations living in Greater Cleveland, San Diego, California, and Puerto Rico.

Ms. Mendez was appointed to the Cuyahoga Arts and Culture Board of Trustees. She was selected as a member of the Leadership Cleveland class of 2020. Nancy was named as a 2013 Distinguished Hispanic Ohioan by the Ohio Latino Affairs Commission. Nancy participated in the American Society on Aging – New Ventures in Leadership Fellowship. She has also served on numerous non-profit boards including the Nueva Luz Urban Resource Center board of Trustees and served as the Board Chair from 2006-2008. She also served as the vice-president of the LBGT Center Board of Trustees and as a board member for the Cleveland Rape Crisis Center.