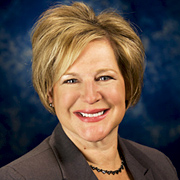 Martha Cutright Sarra is Vice President & Chief Ethics and Compliance Officer for The Kroger Co., based in Cincinnati. She is responsible for identifying areas of most significant compliance risk, developing compliance programs and assuring execution of the company’s ethics and compliance programs.

Before joining Kroger, Martha practiced law at a Cincinnati firm as well as Lexis/Nexis. She joined Kroger in 1998 as an attorney. In 2002, Martha was named senior counsel, where she oversaw the general corporate and business law services of the Law department. In 2010, she was promoted to vice president, chief litigation counsel and assistant secretary. Martha was named to her current role in 2011.

Martha earned a bachelor’s degree in Finance from The Ohio State University and earned her law degree from the University of Cincinnati. She currently serves on Xavier University’s Cintas Institute for Business Ethics Advisory Board. Martha and her husband, John, live in Anderson Township, Ohio, and have three children.