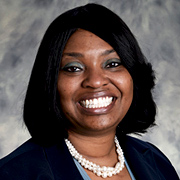 Bonita J. Brown currently serves as the Vice President and Chief Strategy Officer for Northern Kentucky University where she leads the campus in implementing Success by Design, the university’s strategic plan solely focused on student success. She previously worked as the Vice President of Network Engagement at Achieving the Dream, a national non- profit leader that champions evidence-based institutional improvement in community colleges across the country. In this role, Bonita is responsible for supporting a network of over 220 community colleges in 41 states as they work to implement sustainable, campus wide student success efforts. Prior to this position, she served as the Director of Higher Education Practice with the Education Trust in Washington D.C. While at the Education Trust, she created and led an initiative entitled Optimizing Academic Success and Institutional Strategy (OASIS), which was a national network of regional, comprehensive, minority serving institutions that enroll large numbers of low-income students and students of color. As the Director of Higher Education Practice, she worked with the institutions in assessing data and implementing national best practices for improving student success and closing completion gaps. Previously she served as the Vice Chancellor and Chief of Staff, and as Assistant Secretary to the Board of Trustees at the University of North Carolina at Greensboro.

Over the course of her career, Mrs. Brown has also served as the Chief of Staff at the University of North Texas, General Counsel at the University of North Carolina School of the Arts and Assistant Attorney at Winston-Salem State University. She has also served on the Boards of United Way of Denton County, Presbyterian Hospital in Denton, TX and on the Board of the Greensboro History Museum in Greensboro, NC. She has participated in the HERS Leadership program, the AASCU Millennium Leadership Initiative and is a graduate of the Harvard Institute of Educational Management. Mrs. Brown received her BA in history from Wake Forest University and her JD from Wake Forest University School of Law.