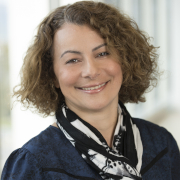 Lama is a strong advocate for technical women at Intel. As she has reached the status of Intel Fellow (one of 8 female at Intel), she has continued to mentor and Pay It Forward to help build the pipeline of technical females at Intel. Lama enjoys speaking to students and audiences externally about her passion for diversity and her career at Intel.

Her research is focused on context-aware and proactive computing. Nachman is creating technologies that can gain a deep understanding of people through sensing and sense-making, then act on that context to help them in many aspects of their lives. She leads a team of researchers developing sensing systems, algorithms and applications to enable these compelling experiences and transfers those technologies to various Intel business units, where they can have a positive impact on future Intel products.

Nachman first joined Intel in 1996, then left in 1999 to hold senior engineering roles at Weave Innovations Inc., Microsoft Corp. and Ubicomp Inc. She resumed her Intel career in 2003 to work on wireless sensor networks. As a researcher in the Intel Labs iMote program, she focused on developing next-generation self-organizing sensor network nodes and deploying those technologies in commercial and industrial settings. Subsequently, Nachman managed the sensing and context team, where she led researchers developing sensing and inference capabilities for proactive health monitoring and deploying those technologies with patients in collaboration with physicians. She has served as director of the Anticipatory Computing Lab since 2009.

One of the most notable achievements of Nachman’s career is an Intel collaboration with Professor Stephen Hawking. Beginning in 2012, she led a team of researchers who developed a new software platform and sensing system to help Hawking communicate. Subsequently, she also led the effort to take that technology to the open source community, enabling people with disabilities worldwide to communicate using limited input and live as independently as possible.

Nachman holds bachelor’s and master’s degree in computer engineering from the University of Wisconsin-Madison. She serves on multiple program committees in the areas of ubiquitous computing and wireless sensor networks, including SenSys, MobiSys, UbiComp and Percomp. She has more than 30 publications and 30 patents in the areas of ubiquitous computing, wireless sensor networks and context awareness, with many additional patents pending. She was named an Intel Fellow in 2017.