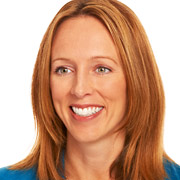 Kelly was named Group Vice President and Chief Creative Officer of American Greetings in November 2018. In this role, Kelly oversees the Creative, Licensing, New Product Concepts and Business Intelligence teams. Together, these teams create and source industry-leading content and turn that content into products that consumers crave. Previously, Kelly served as Group Vice President of Creative and Greeting Cards, where she was responsible for leading the company’s core business.

Kelly joined American Greetings in 2002 as a Category Manager in Business Intelligence. She served in a series of business leadership roles in Seasonal Cards and the Target account team until 2008, when she was promoted to Executive Director of Product Development. After four years leading the company’s Product Development function, Kelly was promoted to Vice President, Creative in 2012.

Prior to coming to American Greetings, Kelly worked for JP Morgan in New York and Keybank in Cleveland.

Kelly earned a Bachelor of Science degree in Finance and International Business from Georgetown University. She received her MBA from the Kellogg School of Management at Northwestern University.

Kelly lives in Lakewood, Ohio, with her husband, Scott, and their dog, Zoey.