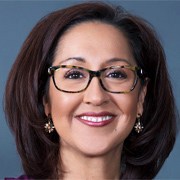 Kathryn Medina is a member of the Bank’s executive committee and is Senior Vice President of People & Culture and Chief Human Resources Officer.

Ms. Medina joined the Chicago Fed in 2016, as Vice-President of Talent Management. In that role she managed the areas of talent acquisition, leadership & organizational development, compensation and employee relations. She was promoted to Vice-President of Human Resources in 2017, overseeing the additional functions of HR Operations and People Analytics. In her current role as Senior Vice President and Chief Human Resources Officer, she has oversight of Human Resources, Diversity & Inclusion and Internal Communications. Prior to joining the bank, Ms. Medina was the Chief Talent Officer for APCO Worldwide, an independent, global communications and business strategy firm. Prior to joining APCO, she was Executive Director of the Chief Human Capital Officers (CHCO) Council at the Office of Personnel Management (OPM). In that role, she directed the broad portfolio of Council activities, focused on strategic human capital management for the federal workforce of 2 million employees.

Ms. Medina holds a B.S. in Business Administration, and a Master of Education in Global Human Resource Development from the University of Illinois at Urbana-Champaign. She also earned a Lean Six Sigma certificate from Villanova University. Ms. Medina has been a certified Senior Professional in Human Resources since 2006, and has earned both HR industry distinctions – SPHR and SHRM-SCP.

Ms. Medina is a member of the Society for Human Resource Management and has served on a number of advisory panels including the Next Generation of Government, and American Council for Technology-Industry Advisory Council (ACT-IAC). She was a member of the board of TBI, a subsidiary of the Association for Talent Development (ATD) and a former adjunct professor for Georgetown University Graduate School of Continuing Studies, where she taught strategic human capital management.