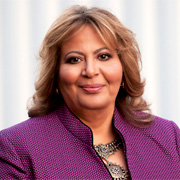 Sahar Andrade, MB.BCh is a Diversity, Global Leadership & Culture Competence Speaker/ Consultant, certified as an E-marketer and Social Media Strategist. She lived, worked and been educated in 7 countries and 3 continents; she speaks 5 languages. She holds a Double Bachelors of Medicine, and Surgery, Major in Psychiatry from Cairo University; and successfully completed a Mastery of HR Studies Certificate Program. , She has been named “One of the Nation’s Authorities on Diversity” by the LA Business Journal. She is a “SUE Talk” Speaker as well as a “TED TALK” Speaker. Her Entrepreneur training program received Congressional Recognition. She has been nominated as a “Woman Advocate” by the Connected Women of Influence for 2017, Recognized by the “State Senate”, the “State Assembly” as well as the “Board of Equalization” as a “Women breaking barriers” in 2016; and had been honored as an “Inspirational Woman” in 2015 She was awarded the “Diversity Insights award 2015” by the National Diversity Council and the “Leadership Excellence award 2014” by hr.com. She has appeared multiple times on nationally syndicated radio like 1100 AM KFNX news radio. She gave speeches at University of Phoenix, USC, UCLA, Cal State Long Beach, Cal State Dominguez Hills, Cal State San Bernardino, SBA (Small Business Administration), LA Convention Center, and the Woodbury University, she also spoke at many conferences locally, in Canada and overseas. She has been featured as an SME (Subject Matter Expert) numerous times in many National magazines’ articles as: Diversity Executive, and Diversity Bar. She is a Business Advisor at PCR-SBDC a subsidiary of the “Small Business Administration” helping small business grow using Social Media and Marketing. She termed as a Board Member for NAAAHR, and as a Board Member for Los Angeles Diversity Council. Currently a board member of Leadership Circle of change. Her current clients’ list include government agencies, public utilities, non profits, recruiting companies, healthcare and educational organizations as well chambers of commerce, Sahar Andrade is the founder of “Sahar Consulting, LLC” and “Reinvent Yourself to Greatness/ So You Think You Can Entrepreneur.