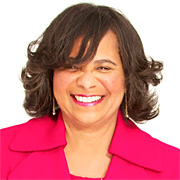 LaVonna Blair Lewis, Ph.D., MPH is a Teaching Professor of Public Policy and the Director of Diversity and Inclusion Initiatives for the USC Sol Price School of Public Policy. She is also the Director of the USC Diversity in Healthcare Leadership Initiative, a health management and policy pipeline program that she helped establish at USC in 2002. Dr. Lewis joined the USC faculty in 1996 from Rice University where she received her PhD in Political Science and she was selected Undergraduate Professor of the Year in 1998 and 2001. In 2013 and 2015, she was selected Professor of the Year for the Masters in Health Administration Program. She also received the Professors of Color Award, presented by the USC Asian Pacific American Student Assembly and Academic Culture Assembly in 2014 and 2015. And in 2016, she received the Robert Biller Outstanding Faculty Award from the USC Sol Price School of Public Policy.

Dr. Lewis’ areas of research and professional interests consistently focus on cultural competency and health disparities, both targeting the health status and health care needs of underrepresented groups. As such, she feels she has a two-fold mission in life—to make the invisible, visible (if people are blind or unaware of problems for a particular group or in a particular community, you have to find ways to get these problems on their radar screen) and to make people uncomfortable (she believes that if people are always comfortable, they aren’t being challenged or they have quit learning and growing).

She has worked on multiple projects that address racial and ethnic health disparities in cardiovascular disease (CVD), diabetes, and infant mortality. From 1999-2012 she worked with a Los Angeles based community based organization (CBO), the Community Health Councils, Inc., on the African American Building a Legacy of Health (AABLH) Project. The project, funded by the Centers for Disease Control and Prevention, was a community based project that explores individual, organizational, and community support for (and barriers to) healthy living, a key factor in reducing CVD and diabetes.

Additional funding from the CDC in the form of a Community Transformation Grant and REACH Demonstration grant explored lessons learned in the AABLH project in other ethnic enclaves and communities in Los Angeles County. In addition, the projects worked with additional partners and other types of community organizations, including schools and federally qualified health centers. Her work has appeared in the American Journal of Public Health, Society and Medicine, Family and Community Health, the Journal of General Internal Medicine, and other health management and policy journals. Moreover, all of the work to date has employed a community based participatory research framework that partners with the relevant stakeholder groups in developing the research questions.