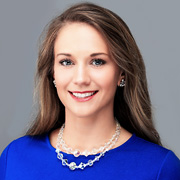 Malena Caruso is excited to join the WTOL and Fox 36 team in Toledo. You can see her in the evenings reporting for the daily newscasts.

Her passions are; people, learning and sharing information. She is Ohio born and raised and happy to call Toledo home.

Malena is familiar with the Toledo market, as she moved here in 2013 from Washington, D.C. While in DC, she worked for the Washington Bureau of ABC news and ESPN before moving to Chicago to attend Graduate School at the Medill School of Journalism at Northwestern University in 2011.

After earning her MSJ, she returned to DC and worked for The Associated Press and Al Jazeera English before moving to Toledo to continue her on-air reporting career.

Malena earned her B.A. in Broadcast Journalism with a Political Science minor from Kent State University. She is originally from Northeast Ohio – a huge Cavs and Indians fan!

When she’s not at the station, Malena loves being out in the community. She’s a respected yoga instructor in the community acting as an ambassador for Toledo’s lululemon athletica store, an avid runner and a lover of all things outdoors. She loves the area Metro Parks and running with the Dave’s Marathon in training groups.

She is the proud mother of a Chocolate Labradoodle named Duke Bear.