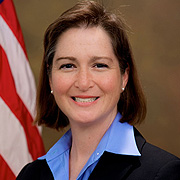 Barbara L. McQuade is the U.S. Attorney for the Eastern District of Michigan. She was appointed by President Barack Obama, and is the first woman to serve in her position. McQuade also serves as vice chair of the Attorney General’s Advisory Committee and co-chairs the Terrorism and National Security Subcommittee.

McQuade also joined with other law enforcement leaders to launch Detroit One, a violence reduction strategy and community partnership. Since Detroit One began in 2012, homicide rates have gone down 24 percent.

Before becoming U.S. Attorney, McQuade was an Assistant U.S. Attorney in Detroit for 12 years, serving as Deputy Chief of the National Security Unit.

Before joining the U.S. Attorney’s Office, McQuade practiced law at the firm of Butzel Long in Detroit from 1993 to 1998, and served as a law clerk to Hon. Bernard A. Friedman on the U.S. District Court for the Eastern District of Michigan from 1991 to 1993. From 2003 to 2009, McQuade served as an adjunct professor at the University of Detroit Mercy School of Law, teaching criminal law in the evenings.