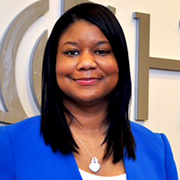 Christie Kuhns has been involved in community organizations, since she was a teenager performing in front of Cincinnati City Council trying to save the Arts Consortium of Cincinnati from budget cuts. Driven by her commitment to the city, and the community organizations she became a part of, it was a no-brainer to begin her higher education at the University of Cincinnati. Christie went on to attend the University of Cincinnati College of Law where she developed a passion for policy advocacy and its impact on working families. Though Christie went on to practice law at both a major law firm and fortune 500 company, she felt the need to deepen her service to her community. She became active in the Avondale Community Council where she served on the Board of Trustees for a decade and was founding member of the Avondale Comprehensive Development Corporation. She became President of the Board for the African American Chamber of Commerce and was a fierce advocate for women and minority owned businesses. Also, Christie was appointed to City of Cincinnati Planning Commission where she helped to ensure all city neighborhoods were protected. These are just a few examples of the many organizations Christie worked with to build up the community.

Christie was elected to serve in the Ohio House of Representatives in 2015 where she served on the Health and Aging committee, Financial Institutions, Housing and Urban Development committee as Ranking Member and the Insurance Committee. While serving in the House, Christie was known for her bipartisanship, advocacy and ability to bring resources back to her district.

In 2015, she joined UC Health to lead the system’s community relations strategy. She has worked with UC Health leadership, associates and community stakeholders to develop a framework to make improving the physical and economic health of our community a system priority.

Christie has been recognized for her service to the community by many awards, some of which include: The Ohio Legislative Black Caucus President’s Award, July 2016; United Way New Century Community Service Honoree, 2014; Venue Magazine, 2013 Woman of Influence; Cincinnati Enquirer’s 20 Professional Women to Watch in 2012; Profiled in the 2011 edition of the Women’s Book; Applause Magazine Emerging Leader, February 2004; Leading Women Inc. Woman of the Year for Service Industries, March 2002- The youngest recipient in the awards history.

Christie’s role in the taskforce is to ensure we understand the efforts happening in communities around the region around the Opioid crisis and to ensure we are supportive and complimentary to those efforts.