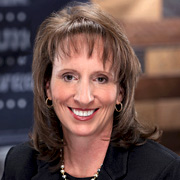 Melissa Strait serves as the Chief People Officer for Arby’s Restaurant Group, Inc. (ARG). Originally from Muskegon, MI, Strait graduated from Hope College with a Bachelor’s of Arts degree in psychology. She began her 30-year tenure with Arby’s behind the counter of a restaurant in 1984. Strait learned leadership and guest service skills at the frontline of Arby’s operations in order to work her way through college. In 1995, she became director of training and then her career quickly progressed. Strait was named Vice President of Training and Development in 2000.

In this role Strait is responsible for leading the strategy, development and execution of human resources and key organizational effectiveness and talent management programs across the company.