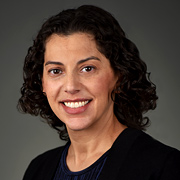 Sharon Werner is currently Chief Counsel at PNC Bank. Prior to PNC, Sharon served in the Obama Administration as the Chief of Staff to US Attorney Generals Eric Holder and Loretta Lynch. In that role, Sharon acted as the principal advisor to the Attorney General on all significant matters, including criminal prosecutions, complex civil litigation, national security issues, cybersecurity, domestic and international policy development, legislative strategy, and senior-level personnel decisions. Sharon also served as White House Liaison to the Department of Justice.

Prior to her time in the Obama Administration, Sharon spent five years as Chief of Staff to Congressman Jason Altmire (D-PA). She also served as an associate at Debevoise & Plimpton LLP in New York. Sharon began her career as a law clerk to the Honorable Barbara S. Jones in the Southern District of New York.

Sharon earned her JD from Stanford Law School and her BA from Penn State University where she was a member of the varsity swim team.