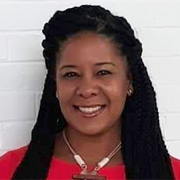 A native of Philadelphia, Nicole landed in Pittsburgh to attend the University of Pittsburgh. After graduating, she began working as a Compliance Officer for the U.S. Department of Labor/Office of Federal Contract Compliance Programs (OFCCP). During 11 years of service at the OFCCP, Nicole worked on behalf of victims of discrimination.

She decided to make a career change and joined Mellon Financial Corporation, now BNY Mellon. Since she has been with BNY Mellon, she has become the VP/Manager of Affirmative Action Compliance and is responsible for the strategy of the company’s Affirmative Action Compliance for all US employees. In 2019, she was tapped to manage the strategy for all US Separations, as well as to oversee all HR Policies.

In addition to being a busy mother of two, Nicole is an inventor who markets her cosmetic tool, Nikki’s Magic Wand. The “Wand” is carried in retail and online stores and Nicole has appeared on air, on QVC, multiple times. In 2015, Nicole released her first book, focused on career etiquette, entitled, “Here’s Your Script-Keep Your Foot out of Your Mouth and Your Butt Employed.”

Nicole enjoys supporting various local and national causes. Through her company, Nicole runs the 12 Months of Giving Campaign, where a different cause is supported every month. Having lost her mother to Leukemia at age 10, Nicole also supports The Leukemia and Lymphoma Society by fundraising and volunteering.