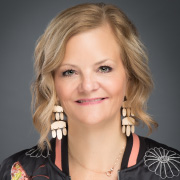 Melinda Garvey is a true media innovator. From traditional long-form print media with her monthly, glossy magazine to her all-digital global media brand, she has an innate sense of what readers want. Despite the roller coaster nature of the media business, Garvey has always sought out what her readers wanted--and needed--and found a way to make it happen. Garvey is a pioneer and expert in the women’s audience space and is committed to advancing the success of women and their businesses through her media companies. She is ahead of her time in the women’s space, which makes her a perfect visionary for On The Dot.

Garvey has revolutionized the way women communicate in Austin by creating a platform and a network, where there was none. She saw a need for a women’s magazine in Austin and took the chance, believing that it could succeed. Seventeen years strong, Austin Woman is still the “go to” magazine for women in Central Texas. Garvey founded Austin Woman magazine in September 2002 and the magazine is well-known and recognized for its in-depth profiles and stories on the influential, female change-makers in Austin.

In early 2016, Garvey showed her media moxie again by launching On The Dot, with the mission to give women the world over a voice and provide inspiration for thousands. And to expand her mission further, in 2019 Garvey developed and launched On The Dot Diversity, a Diversity, Equity and Inclusion software platform to help all women and diverse employees connect and advance within medium and large organizations.

In Garvey’s words: “It’s really all about leveling the playing field for women and diverse employees by giving them access to mentors, peers, content and events within their organizations, creating opportunity for advancement, and ultimately equality.”

In addition to more than seventeen years deep engagement experience with her own media company, Garvey has spent her entire career in the media/marketing/advertising field. She began her career at a large advertising agency where she worked on the US Airways account and then at a daily newspaper group, where she served as VP of Sales and Marketing.

Garvey also served as Entrepreneur in Residence for The McCombs School of Business at The University of Texas Austin for the 2011-2012 school year.

Garvey is an accomplished businesswoman with a strong passion for helping others. She is a frequent keynote at luncheons and events, inspiring women to think big and pursue their dreams. She is often asked to meet with budding entrepreneurs, and always works closely with the advertising clients.